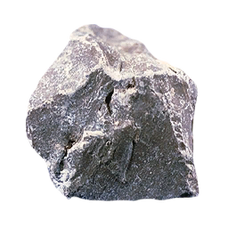 The Limestone is a Resource in the Primitive+-DLC of ARK: Survival Evolved.

Limestone is gathered from metal-rich rocks with a pickaxe. While any pickaxe can gather Limestone, the Obsidian Pickaxe harvests it at a significantly higher rate, at the cost of not harvesting any Iron. Metal-rich rocks are usually found on mountains or in caves.

Limestone can be combined with Claystone in a Handmill to create Clay, which is used to craft adobe and brick structures. Limestone is also used to create Fresh Cement.

Limestone is used to craft the following items:

There is currently a bug with Limestone whenever the server is updated. Any previously harvested limestone pre-patch will become Null and unusable. It will not stack with any Limestone harvested after a patch.