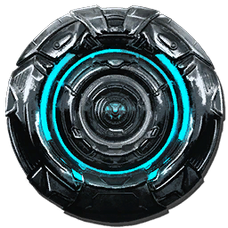 The M.D.S.M. or Mek Deployable Shield Module is an item in Extinction.

, a spherical dome will be formed around the Mek. It can be deactivated by pressing those controls again or exiting the dome. The shield generates heat while active, and will also automatically deactivate once overheated.

While active, allies inside the dome will take 30% reduced damage. This buff is signaled by the presence of a aura of blue squares rising from them (needs testing on actual armor increase).

When enemies under the shield exit to the outside of the shield, they get 40% increased damage taken and 30% reduced movement speed for 30 seconds; Deactivating the shield does not inflict this debuff. This debuff is signaled by the presence of an aura of red squares rising from them.