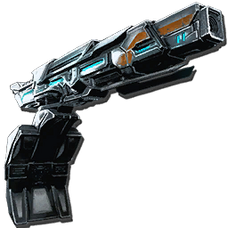 Mek enter its turret mode by bending over while using its sword as a stake. In this position, the cannon can be aimed and fired after a brief warm up period while holding Lmb,

. Upon firing, there is another short cooldown period before the cycle is completed.