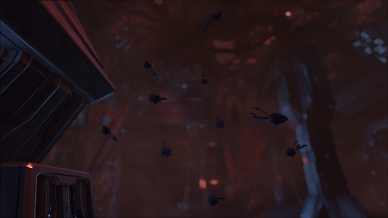 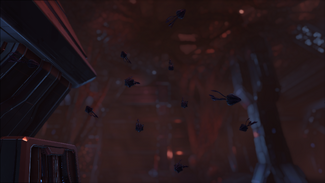 The Macrophage is a creature in Genesis: Part 2.

Macrophages are generally ignorant to most individuals even when flown too close past it. However, damaging anything near it or itself, or grabbing hold onto the

bulb renders it hostile towards anyone or anything that hurts Rockwell or his creation as a whole.

The Macrophage looks like a swarm of tiny summoners.

This section displays the Macrophage's natural colors and regions. For demonstration, the regions below are colored red over an albino Macrophage. The colored squares shown underneath each region's description are the colors that the Macrophage will randomly spawn with to provide an overall range of its natural color scheme. Hover your cursor over a color to display its name and ID.

This section describes how to fight against the Macrophage.

Macrophages can normally be ignored for the most part unless they became hostile (identified when it opens its eyes). Hurting just about anything, even breaking the plants, will cause it to become hostile.

A survivor should use a torch in third person to dispatch Macrophages faster. If any survivor has access to a flamethrower it would be best to use it, because the flamethrower has the ability to take down multiple swarms at once. You can also use a campfire.

A torch will work wonders for one to two Macrophage swarms at a time, whilst a flamethrower can take out crowds of them with ease. A campfire will also work if you can get the Macrophages over it.

Macrophages inflict minimal damage while slowly draining stamina until it’s depleted. While it may not sound dangerous, it can be. It all depends on whats around a survivor(s) when they are getting swarmed, potentially making escape impossible especially with its ability to disable both sprinting and Tek Sprint from

Tek Leggings with every hit.

Macrophages are vulnerable to incendiary (fire) weapons and ammo. Torches will be a new survivor's best friend, while flamethrowers will prove more effective when dealing with large crowds.

Another option, is to light a camp fire. They randomly die after being near a camp fire after 1–2 minutes.