This article is about Magmasaur, not to be confused with 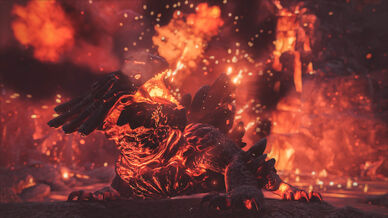 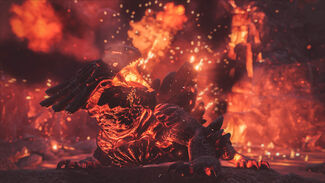 1 Adults cannot be tamed, but

Wild Eggs can be hatched.
3 Can only breed in lava.

No
Immobilized By
Reproduction
Egg 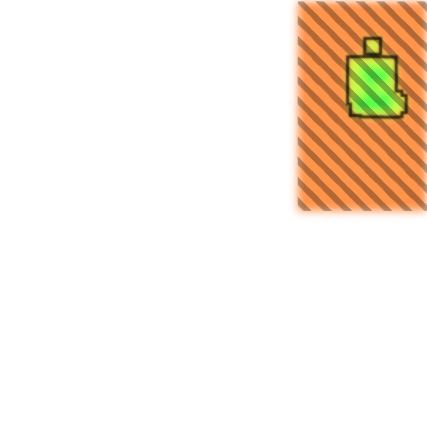 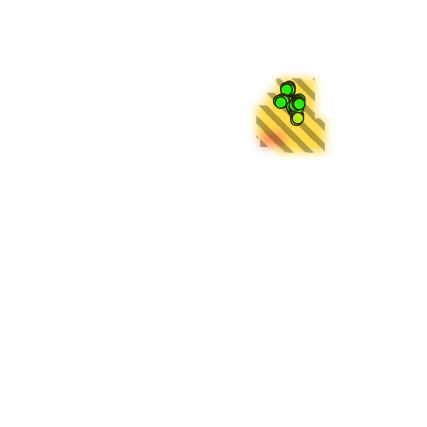 The Magmasaur also known as the Cherufe is a Creature in ARK: Survival Evolved's Expansion Pack Genesis: Part 1.

The Magmasaur is a fire-based Creature that gains strength and charges up attacks through heat. It has an affinity for lava to the point of even swimming in it, and dislikes water. The Magmasaur has a heat-resistant Saddle that protects the survivor from heat, fire, and lava.

The Magmasaur will consume many different materials, including gasoline, stone, raw and cooked meats, organic polymer, and ambergris. Magmasaurs are able to act as a mobile forge and refine/smelt the same materials as a

The Magmasaur has the appearance resembling a bearded dragon. Having a similar head and body shape (it also kind of looks like a rocky molten version of a rock drake). It can be found in and around any source of lava in the volcano biome. They can also be found in very large numbers around their egg spawns inside the volcano.

This section displays the Magmasaur's natural colors and regions. For demonstration, the regions below are colored red over an albino Magmasaur. The colored squares shown underneath each region's description are the colors that the Magmasaur will randomly spawn with to provide an overall range of its natural color scheme. Hover your cursor over a color to display its name and ID.

This section describes how to fight against the Magmasaur.

The Magmasaur is a formidable opponent, it has multiple attack styles which can be very devastating.

The first attack that the Magmasaur has is searing spit which can strike as far as 15-20 foundations away, and can instantly destroy wood, stone, as well as metal structures within a few foundation range of the impact. It can kill any under-geared or overwhelmed survivor instantly and can hit you even if you are riding something. Survivors should be cautious they don’t find themselves on the receiving end of this attack.

The second attack that the Magmasaur can use when a survivor(s) or tamed dinosaur(s) stray too close is searing flame which causes burn damage over time. The debuff will constantly refresh until a survivor has either ran out of range or killed the Magmasaur.

There are two good strategies for dealing with Magmasaurs.

The first is to deal with them at range, but keep in mind that Magmasaurs take reduced damage from fire arms, and you will have to dodge searing spit attacks. A high quality Compound Bow is recommended for ranged attacks.

The second requires a tame and requires you to quickly close distance with a Magmasaur. While in melee range, Magmasaurs will rarely, if ever, use their searing spit attacks. As that is their most devastating attack, it makes them much easier to kill. Always be on the lookout for other nearby Magmasaurs who may use their spit attacks while you’re engaged in a melee fight!

The Magmasaur is completely immune to lava. A survivor should make sure they have a decent distance between themselves and the surrounding Magmasaurs before attempting to grab any eggs from their den.

Try and use ranged tools to attack the Magmasaur as it has dangerous abilities for close quarters combat. It's recommended to use a strong ground tame.

A group of survivors could possibly use any range weapon to deal damage to a Magmasaur to get aggro on a fast mount, while the other survivors wait until the Magmasaurs are far enough away from an egg before attempting to grab one.

A strong creature with high dps can kill it if you engage the magmasaur in a fight, like a high level ferox with decent melee damage.

Use a Rocket Launcher and the Bloodstalker for its ability to lift you up when firing.

A Crossbow would also work if a survivor is trying to lure any Magmasaur(s) away from an egg.

The Magmasaur can fire meteor-like projectiles from a long distance, and their short ranged burn attack can be deadly for survivors and Creatures who stray too close. It can also wipe your wood, stone, and even metal base. They can shoot Dinos/Humans outside of turret range, much like the Managarmr during release of its state.

The Magmasaur's shotgun blast shoots out drops of ignited oil that can catch creatures on fire as well as giving a narcotic effect to creatures and players that are directly hit by it.Thus can knock you out because it does around 100 torpor with a well placed hit. Its shotgun blast also has knockback to cause creatures to be caught in the ignited oil, dealing burn and direct damage.

The Magmasaur is weak when exposed to cold temperatures, more so when in water (including rain).

Although risky, a survivor can flank a single Magmasaur and be able to stay behind it because of it's horrendous turn radius.

Its shotgun attack only covers its flanks.

Wild Magmasaurs cannot be tamed. The survivor must steal and hatch

, or have two tamed Magmasaur breed in a lava puddle at the Volcano Biome Simulation to produce an egg. Magmasaur eggs can only be found in Magmasaur nests. The best way to steal them is to use a Cactus Broth (Scorched Earth) and ghillie armor to avoid getting detected, and then use Grappling Hooks, and a glider suit skin to fly around until you find a good egg. Prepare a teleportation and grab the egg at the last second to avoid getting hit.

A Magmasaur egg has a five hour incubation period.

Sulfur to feed off until adulthood, which are only obtainable through mining glowing cracked/tinted green rock found in the lunar biome. Ambergris restores 500 food on babies, and they have a 20 minute spoil timer upon acquisition.

As Ambergris can be stored in Fridges and Tek Troughs, it is advised to use the Tek trough when accessible, to preserve the Ambergris up to, at most, one day to feed Juvenile and Adolescent Magmasaurs.

Magmasaur babies lose 12 Food / per minute, or 720 food / per hour, within their baby state. Their consumption rates will be much lower upon reaching adolescent and adult stages.

Metal Ingot in its inventory. Holding the right mouse button(Left Trigger on Console) strengthens the Searing Spit, unleashing a barrage of lava when it lands. This cannot be used or has a very slow charge rate while it's submerged in water, or while it's in cold temperature biomes such as the Arctic biome or cold parts of the Lunar biome, but its charge rate is increased in hot temperatures, commonly found throughout the Volcano Biome.

If allowed to charge up searing spit but not spit it out, pressing "c"(Clicking Right Stick on Console) will cause the Magmasaur to fire explosive shrapnel around its side instead, exploding nearby. It can also harm itself as well, while minimal, so care must be taken when using this,it also will do torpor it can be used to knock out other magmasaurs for easy access to the eggs.

While smelting, its food drops substantially and will attempt to eat any Raw Meat inside, which are insubstantial food. Keeping mainly

Stones unless trying to cook meat will maintain their food. (Level in Weight, and avoid using Searing Spit as food will drain to zero.)

Weight of the following resources by the listed amount while they are in its inventory:

For information pertaining specifically to the real-world Magmasaur, see the relevant Wikipedia article.