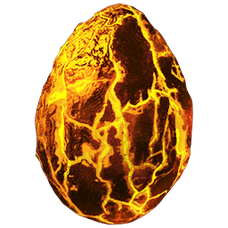 The Magmasaur Egg is one of the Eggs in ARK: Survival Evolved. It is used to hatch

Magmasaur, can be used to make

Extraordinary Kibble and as a main taming food source for

Magmasaur Eggs are randomly dropped by

Magmasaur. They can be eaten or used to make

Magmasaur mate, the resulting egg can be hatched into a baby

Magmasaur will cause them to become hostile and attack the survivor.

Magmasaur needs between 18h and 2d before having the capacity to lay eggs again. The incubation time can be reduced by up to 20% if the egg is placed in an

NOTE: The information shows how to get the egg without any building in the volcano (Due to the fact the entire den is a mission area), and without any form of flying creatures.

Magmasaur Egg are only found inside the Volcano, past the two entrance found at Lavaclaw Flow (33.2 Latitude and 82.5 Longitude) and Scorch'n'Slide (29.7 Latitude and 78.3 Longitude). Below the Volcano are lava pools and makeshift terrain nests made from dirt, some of which contains the eggs (sometimes partially submerged in lava). Upon stealing the egg, all nearby

Magmasaur will begin to attack the survivor. The fact there are no usable flying creatures in genesis combined with the limited time the survivor can stay in the volcano and other nearby creatures (most notably

Rock Elemental (X Variant) makes acquiring these eggs quite dangerous. While it is possible to teleport out from within the den, it is imperative to do so only within a safe place due to the number of hostile creatures crawling around the volcano.

Survivors are encouraged only to bring what they are willing to lose, as fighting a Magmasaur (or a bundle) head on is a foolish idea without the right creature to keep its distance from the creature's effect, and taking into account of the Rock Elemental nearby.

Ferox are a good way to get the eggs from the Magmasaur. Take into account that Bloodstalker's health are not high, along with the weight, and as such is best to avoid confrontation as it would lead to a quick death if not handled carefully. On the other hand, Ferox have a limited timer after they shapeshifts to giant, and due to the nature of where the eggs are obtained, must be cautious when climbing out of the den with a Ferox.

If you have the DLC Extinction the

Enforcer can be a good option to steal the eggs from their nests and thanks to their speed and teleportation you will be able to escape before you are attacked, but since the enforcer has little life it will have to be one of good level