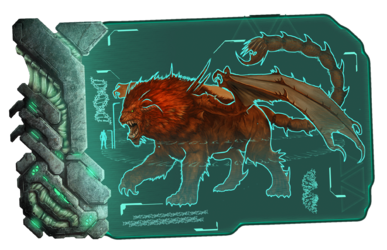 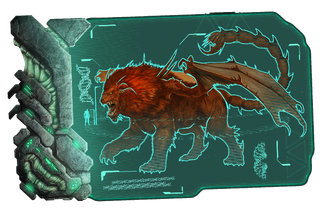 The Manticore is a hybrid that consists of the body and head of a lion, with three rows of sharp teeth, bat-like wings and ears, and a scorpion's tail that has toxic and lethal venom. While also having ram horns (two pointing upward and two curled downward) on the top of its head, sharp claws, and spikes, its fur is a tan brown coloration and its eyes glow a permanent orange glow.

Its appearance changes on difficulty with the Beta being a more Orange color and the Alpha being a Red color with deep blood red fur.

The Manticore always spawns with the same color scheme and has no color regions.

This means it is currently impossible to make alterations to the Manticore's colors.

The following items are needed to open the Scorched Earth Portal:

The floor of the arena is teeming with Deathworms. The Manticore will primarily fly about the arena shooting purple bolts in different directions at once while using its tail to inflict torpor. Near the end of the battle Deathworms and later Rock Elementals start spawning and can easily trap and kill your creatures.

For information pertaining specifically to the real-world Manticore, see the relevant Wikipedia article.