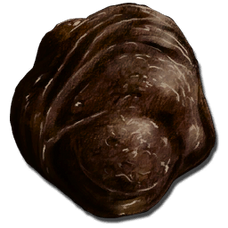 Massive Animal Feces are the special excrements currently only produced by

Titanosaur in ARK: Survival Evolved. From time to time, they automatically drop from these creatures. If you eat this you will probably die.

Massive Animal Feces can be used as fertilizer and add 35,000 points to fertilization when they are put in the inventory of a Crop Plot.

However, it is the only Feces which is partially not worth doing it, it would be better to directly insert them into Crop Plots, as a Fertilizer has less fertilization points (54,000) than 2 or 3 Massive Animal Feces separated (70,000 or 105,000). Therefore, it would be more efficient to combine any other animal feces with thatch to produce fertilizers. The only way it could be somewhat efficient to combine it into fertilizer is if one would use a single Massive animal Feces with 2 other smaller variants. (Excluding two Large Animal Feces or one Large Animal Feces and one Medium Animal Feces, as the sum of their separated fertilization points would still be greater than the Fertilizer's)

Unlike the other size variations of feces, as of Patch 243.2, Massive Animal Feces cannot be used for taming Dung Beetles. However, they can be converted by the Dung Beetles, given a high enough weight stat, into 16 bags of Fertilizer and 14 Oil per feces.[1]