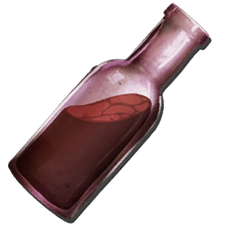 Medical Brew is a tonic in ARK: Survival Evolved. It can be created at a

Consuming this item heals the player, regaining 40 points of

Health over 5 seconds. It takes 30s to brew in the

It cannot be used on tamed creatures, instead requiring

Raw Meat for carnivores or

Sweet Vegetable Cake for herbivores to achieve a similar effect.

It is also commonly referred to as a "med brew".

Canteen with at least 25% water in the Cooking Pot, and remove any

Charcoal during the cooking process to avoid the creation of any dyes.

AnglerGel can also be used as fuel to reduce the risk of accidentally producing dyes. Thatch and AnglerGel are not used at all by dyes, while there are not enough ingredients for Sparkpowder to produce dyes if only those for the brew are present.