This article is about Megachelon, not to be confused with 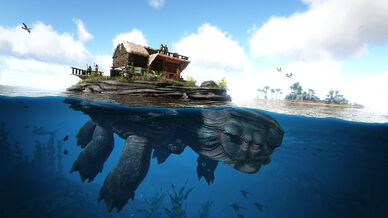 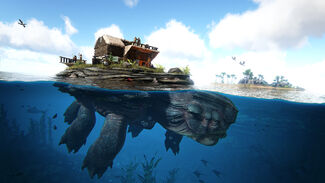 3 Must be in deep water. 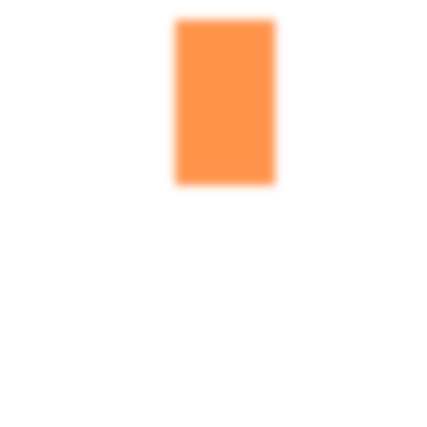 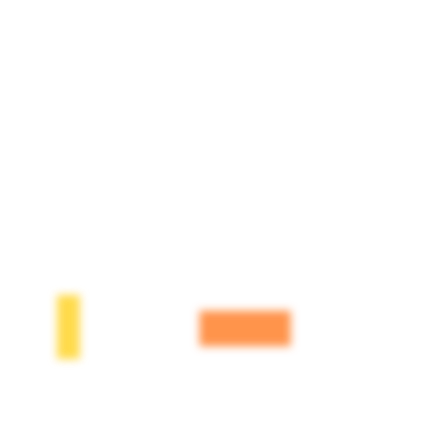 The Megachelon is a Creature in ARK: Survival Evolved's Expansion Pack Genesis: Part 1.

The Megachelon is a tame with a shell that can be built on, Also growing rare resources on its shell. When submerged, air bubbles will be generated around the shell.

The Megachelon is a giant, six-legged, four-eyed turtle with almost human-like facial features; possessing wrinkled skin, external ears, and a toothy mouth instead of a hardened beak. It can be found swimming slowly through the ocean biome of the Genesis simulation, functioning as a living, breathing island; carrying its own unique little ecosystem on the back of its flattened, stone-like shell where moss, grass, and shrubs all grow out of its body, becoming more and more overgrown with the passage of time. While floating along the water's surface or walking across land, the lush habitat it carries with it attracts flocks of birds, which circle the Megachelon in wheeling flocks.

This section displays the Megachelon's natural colors and regions. For demonstration, the regions below are colored red over an albino Megachelon. The colored squares shown underneath each region's description are the colors that the Megachelon will randomly spawn with to provide an overall range of its natural color scheme. Hover your cursor over a color to display its name and ID.

This section describes how to fight against the Megachelon.

The Megachelon must be tamed passively with a unique mechanic; locate a

Parakeet Fish School (also called Microbe Swarm when they target you) which can commonly be found in the deeper depths and let it target you. Slowly bring the school to the Megachelon and they should start to follow it, initiating the taming process. Make sure that when you are approaching the Megachelon with the Parakeet Fish School, the fish school is targeting you as a survivor, NOT a tame that you are riding. Make sure it says that you are being targeted by a Microbe Swarm when approaching the Megachelon. Otherwise, the fish school can bug out and not properly initiate the taming process. These fish are easily distracted by other tames, structures and even shoulder pets confuse them. If they do stop following you, even when right in the middle of the swarm, you can't force them to pick up the scent, even munching rare flowers doesn't help. If you go far away, like "teleport out of the biome" far, and leave them for a while, sometimes they will sort themselves out. Your best strategy is to head down and get another swarm.

Coelacanth will constantly spawn and attack the Parakeet Fish School and eventually kill it; this is an "anti-trap" mechanic to ensure that it is being tamed as it roams around the water, though it will still need protection. A Bloodstalker is great for grabbing the fish and instantly killing them when you drag them above water and also helps to bypass the anti-trap mechanic due to their pinpoint precision, so long as you pay constant attention. Otherwise, a pair of SCUBA flippers and a pike is usually enough alongside a mount that you can regain stamina on. Focus on the larger fish that can spawn as smaller fish can't normally catch the Megachelon and swarm as long as it's moving around. You may need someone else assisting to actively kill the fish or be out acquiring more Parakeet Fish Schools to continue the taming if your first fish school is killed. In general, taming a Megachelon is at least a 2-person job in most circumstances though higher taming rates on a server can make it doable with just one.

The optimal strategy is to build a trap with 5 behemoth gates near the surface, but also just above a trench. Then find a chelon and boop it on the snoot to lure it into the trap and close the door behind it. Now head down into the trench and find a parakeet school. This way you only have to deal with the buggy task of getting the fish to follow you without having to worry about finding a chelon at the same time. If you leave the chelon trapped, then killing the aggressive salmon without hitting the megachelon isn't impossible, just incredibly difficult. Often the salmon will actually be inside the chelon (listen for a quiet grunting to indicate it's being attacked). If you do decide to attempt this, then munching rare flowers can sometimes draw the salmon out. A better strategy is to completely dismantle the trap and let the megachelon swim free. If you leave any of the trap behind, then the swarm will probably pay more attention to that than to the megachelon. It's also important that you don't get too far from the megachelon, otherwise the swarm will dissappear.

The Megachelon is tamed for its utility purposes. First and foremost, it can support a base on its back to ferry survivors safely and provide them with constant

Oxygen while they are around it. The Megachelon itself can shoot a stream of bubbles that captures creatures and survivors in a bubble and make them float upwards to the surface; this is useful if

Megalodon or other hostiles are in your way and you want them to be moved. While the Megachelon doesn't appear to have any special reductions on

Weight for resources, its high

weight capacity allows it to ferry materials with ease. While it has a very powerful bite, the Megachelon is very slow and has a slow turning speed which makes it a poor battle creature against anything partially mobile. It's advised to have some guardian creatures to fend off the dangers of the ocean though a high-level Megachelon can take a lot of punishment.

Industrial Forge can be built on its back including feeding troughs, storage chests and beds. However, the saddle has a limit of 188 structures on its back. Every little thing counts from foundations to electrical keypads (including structures that are built alongside the saddle like ladders).

Weight inside the inventory of storage structures on the saddle is not ignored by the Megachelon. Take advantage of animals that have weight reduction capabilities to greatly enhance your overall carry capacity.

The saddle cannot be removed from the Megachelon if structures are still on the platform. To remove the saddle, all structures must be destroyed first.

The saddle cannot be dyed if structures are still on the platform. To dye the saddle, all structures must be destroyed first.