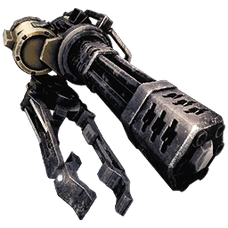 The Minigun is a weapon in Genesis: Part 2. It is a deployable weapon that can be used to rapidly fire at a target. The Minigun requires the survivor to wind it up, and it can overheat from overuse. It also prevents use while on a different ark than the one in which in it was created, for example you cannot craft one on Genesis Part: 2 and transfer it to Scorched Earth.

The Minigun can be spun up by pressing Rmb,

without firing, which will increase your rate of fire. It will not cool down until you stop firing and if fired for too long (6 seconds when hand held and 12 when deployed) will overheat. When overheated you will not be able to fire or spin up the gun until it cools down. When it is spun down it will keep the increased firing rate for a short time and speed up the mouse sensitivity, allowing you to turn quicker and get a new target. While it cools down it is best to reload the gun (Due to the time it takes to cool back down afterwards you are better off to reload if you wish to keep it out).

You can deploy the Minigun by pressing Left Ctrl,

. When deployed, the survivor is able to better concentrate their fire on a target due to increased accuracy(no recoil or scatter if deployed) and reduced spinup times and also cannot hurt friendly dinos. It also gains much more durability and doesn't need to reload, however it is hampered by being stationary, while also having a limited angle of fire.

The Minigun when spun up and/or firing will reduce your mouse sensitivity and movement speed, so targets like alpha raptors are ill advised due to the speed they move (and sheer amount of circling they do). It is also expensive to use due to requiring a large amount of materials to create a Minigun and it costs 118 Advanced Rifle Bullets to fire for 6 seconds.