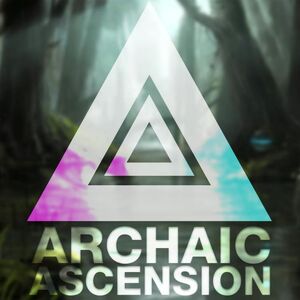 Archaic Ascension adds in the ability to evolve all rideable (sans the arthro and reaper (for now)) vanilla creatures. This mod is meant as an alternative to the traditional dino mod which mostly ignores vanilla, and spawns in a ton of extra creatures. This mod requires you to play the vanilla experience. As you use your dinos in battle, a kill counter will increase until the require amount of kills are met to evolve. After this is done, a UI prompt will appear and you can evolve your dino. When a creature evolves, the evolution takes the level of its pre-evolution creature and sets it as its base level, allowing you to continue leveling.

This mod is geared toward PVP as well as extending the game play of PVE. For PVP play, Alpha Tribes can no longer just go tame replacement powerful creatures after a battle. They must work to replace what they lost. This could cause huge shifts in power on PVP servers.

The creatures in this mod are no frills. Currently there are no special particles or anything crazy denoting a beta and alpha, simply color shifts. Eventually I might add some small particles to add to the effect, but nothing crazy or over the top.

There are various classes of dinos, which determine kills require. Each class and tier has their own required kills. The base kills required, and the per tier multiplier is adjustable via INI codes.

1. Large carnivores such as the Rex, Giga, Spino, and Yuty are not knock out tameable. These creatures spawn in mate boosted pairs. You must engage them in combat. Once the female is at 10% health, it will lay a fertilized egg. You can steal this egg, and hatch it for yourself.

2. Tameable Ark Bosses are required to be at 20% health in order to accept torpor. After the boss is down, you must craft the correct kibble. It will take multiple kibble to tame a boss.

3. While corrupt dinos are now tameable, they require element shards to keep tamed. Should time elapse and no element shards are in the dinos inventory, the creature will untame, and attack anything around it.

4. There are far more wild Alpha mini bosses around the world. These Alpha bosses drop good loot, but they spawn in at a level suggesting that they evolved in the wild. This is where the required INI setup comes into play. If you have default 120/72 levels, you will see wild alphas spawning in around level 396. This simulates the idea that these dinos max leveled themselves, then evolve, multiple times. Default Alpha bosses also have a 3x stat multiplier, simulating a user increasing their stats by leveling.

NOTE: EVOLVING YOUR DINO WILL ERASE YOUR DINOS INVENTORY. REMOVE ALL ITEMS YOU WISH TO KEEP.

Archaic Ascension is highly customizable, allowing users to set stat multipliers, adjusting kills required, and other various things a user might want to change. See the ini discussion for all available links

Currently, this mod has 3 tiers. Vanilla, Beta, and Alpha. More tiers might come in the future as the mod grows and expands.

Current evolution system is my V1 evolution, and V2 will be in the works. Only vanilla dinos can breed. Once you evolve, the dino loses the breeding ability. This is technical limitation required due to the possibility of infinite levels. V1 evolution system does not take into account any bred dino statistics, and randomly assigns new stats on evolution. The only thing that remains the same from the pre-evolved dinos is the level.

Archaic Ascension is a core evolution dino mod. This is a CORE mod, meaning it REQUIRES load order #1.

MaxWildDinoLevel=120 (Max wild level of dino that can be found on your server. Number shown is default)

Please note that this in no way SETS the max level of your server dinos, or your points after tame. This mod needs to KNOW these numbers to properly be setup.