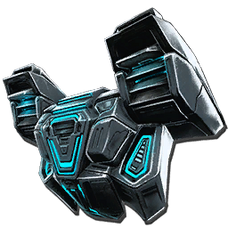 The Eternal Mek Backpack Missile Pod also known as the M.R.L.M. is an item in ARK: Survival Evolved's DLC Extinction.

Rocket Pods will shoot from the Module.

* While having expensive ammo and bad accuracy, this module is capable of doing large amounts of damage if correctly used. Moreover, it requires no special stance like the

M.S.C.M.. Also, because it is not based on Tek or non-explosive bullets, the rockets get a smaller damage reduction on

Titans. Thus being, this module is exceptional at fighting ground-based large creatures.

* The rockets converge to a central focus around 60% of their total range.