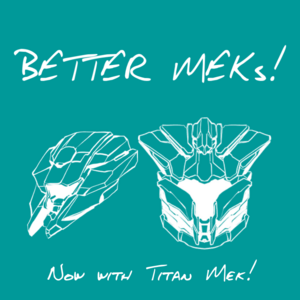 This mod adds in a different version of the

Meks in Extinction, basically removing everything that made you not wanna use it. For example, high fuel consumption, heat meter, annoying stamina/health regeneration, starving etc. Along with adding stuff that was clearly missing that the devs didn't have any time left to add. These new 'Enhanced Meks' can be crafted at the same level as the regular Mek. You can obtain an

Unassembled Enhanced Mek by crafting it in the

Mek Crafting Table. All crafted Meks will spawn at level 51, unless you can use some sort of upgrader. Since you won't be able to get it from

Supply Drops, the leveling will make up to that.

On the vanilla Mek, the devs decided it would be an excellent idea to just speed up the walking animation and use that as the running instead of using the awesome Charge animation they had in the devkit.

Also for some reason the devs didn't add any sound to the 360 turning animations, which made it look pretty boring on the vanilla Mek. In this version, there are now footstep sounds and dust coming off when stepping around, in addition to this, there is now a bit more of a thud when landing; likewise the hover sound was also changed to give it more of a 'flamey' effect.

The camera has been shifted to the side a fair bit which in most cases looks better; it also makes aiming easier.

Unlike normal Meks, Enhanced Meks can level up, enabling you to increase it's Health, Stamina, Melee, etc.

New lightweight versions of the modules are also added, they have infinite durability, however to compensate they are not as powerful as their real counterparts.

The 'Heat' effect has been removed, and the pistol also uses up far less energy per shot, however it may change in the future.

Jumping velocity has also been increased by quite a bit, as the vanilla jump was next to useless.