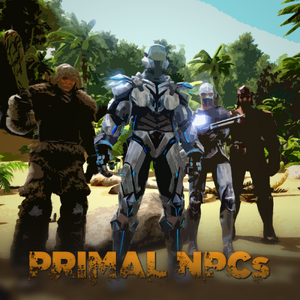 Primal NPCs adds a new experience never seen before in any NPC mod. Players get the chance to interact and either make friends or make war with NPC tribes. It has Primal Fear integration but can also be played on its own.

Primal NPCs is meant to be a PvP style mod & functions differently on PvE.

Every player starts at Neutral. You decide where you go from there. There is a global ranking system so you can see where you fall amongst other players with the NPCs. The higher your reputation the more options available to you. Each status opens up new opportunities.

This is based off the Primal Fear Tier System. They all start out at Primitive Tribe status and will evolve over time.

You can offer the NPCs gifts to increase your reputation. Once you attempt to offer them something they will tell you what they currently want.

You can speak to the NPCs using the chat and they will respond to any questions or remarks that you make. Message must start with @ and include the name and tribe number separated by a hyphen.

But they mostly ignore you.

There is a UI Available by pressing F10 this shows NPCs and your reputation with each tribe. You can also Wipe the NPCs if you are logged in as the server admin.

NPCs will announce in chat when a quest is available, You can ask where they are and go see them to start the quest. Reputation/Items are awarded for completion.

NPC Tribes will tame, control & ride their own dinos. You can also recruit the NPCs into your tribe.

Once spawned in NPCs will harvest their own resources. You can kill the NPCs to loot the resources they collect, but you will lose reputation with the NPC tribe.

Once you have a high enough reputation you can hire dinos from the NPC tribes.

Once you have a high enough reputation you can hire NPCs to collect resources for you.

As your reputation climbs, it will open up the option to ally with the NPC tribe. Once you do this you will be able to use their structures and creatures.

If you decide not to befriend the NPC tribes and your reputation falls low enough, you may be in for some trouble. Roaming Tribes that you share a low enough reputation rating with will become aggressive on patrol if they spot you and/or your tribes tames. Be warned as they will attack with whatever they can muster and should be taken carefully if you are being attacked near their tribe base. Patrols may also attempt to raid your base and/or kill your tames if they wander too close.

The NPCs can use most weapons in the game and will equip the proper weapon/tool depending on the situation.

As the NPCs expand and evolve they have the ability to use all armor types available in the game. The armor types will match the tier level of the tribe.

The NPCs go on regular patrols looking for tames and for players with low reputations.

They currently build 6 different types of bases ranging from thatch to tek, and are based on the tribes tier level. You can raid these but be warned, they do use turrets. Once defeated you can get regular loot out of it.