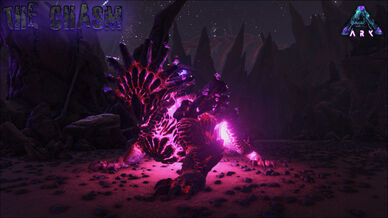 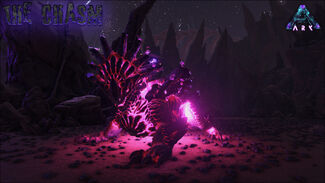 The Elementsaur is one of the Creatures in The Chasm.

This section describes how to fight against the Elementsaur.

Wild Elementsaurs cannot be tamed. The survivor must steal and hatch

, or have two tamed Elementsaur breed in liquid Element to produce an egg. Elementsaur eggs can only be found in Elementsaur nests.

An Elementsaur egg has a five hour incubation period.

Element Ore to feed off until adulthood, which are only obtainable through mining glowing purple rocks found in the radiation/surface areas. Element Ore restores 500 food on babies.

As Element Ore can be stored in Feeding Troughs and Tek Troughs while an Elementsaur is nearby, it is well advised to use the Feeding Trough or Tek trough when accessible to feed Juvenile and Adolescent Elementsaurs.

Weight of the following resources by the listed amount while they are in it's inventory: