Moeder, Master of the Ocean 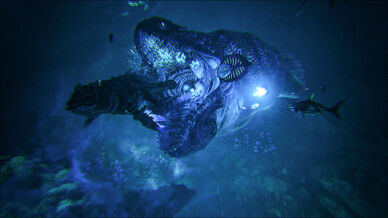 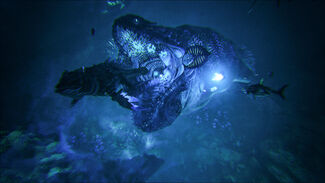 Small
Drag Weight
7500
Habitat
The Moeder Arena during One Tough Moeder, accessible via the

During the majority of the boss fight, Moeder will hide in a corner and summon her Eel minions to attack her aggressors. When all Eel minions are destroyed, she'll emerge and attack, before eventually retreating again.

Moeder is a giant, scale-plated eel with a massive, blue-hued mouth and relatively small blue eyes. Her natural appearance (gamma) glows a green bioluminescence. She is roughly 250 meters in length.

The Moeder, Master of the Ocean always spawns with the same color scheme and has no color regions.

This means it is currently impossible to make alterations to the Moeder, Master of the Ocean's colors.

Eel Minions. They look like much smaller versions of Moeder herself but with less bioluminescence glowing blue instead of green and are mostly white in color, they are also unique in that they have boss health bars unlike other minions and more similarly to things like the

Megapithecus technically making them in and of themselves bosses just like Moeder.

Moeder, Master of the Ocean

This section describes how to fight against Moeder.

The fight against Moeder alternates between 2 phases. The first phase will have Moeder hiding and invulnerable while her

Eel Minions either bite at survivors and tames or discharge electricity in varying methods to assault them and apply the electrocuted debuff, greatly reducing damage output and movement speed of those affected for a short time. Once they're all slain, Moeder will emerge from her hole, becoming vulnerable and dealing a lot of damage with her massive bite. Once the fight against Moeder persists for a minute or so, or after a certain threshold of damage is dealt, she will unleash a massive barrage of electric orbs, become immune to damage, go back to hiding, and the minion phase starts again. There will be at least 3 minion phases before Moeder can be defeated. Underwater whirlpools will also spawn partway into the fight, causing some disorientation but deal no damage themselves. Overall, this boss fight is not too difficult and there are a variety of methods to overcome Moeder's wrath.