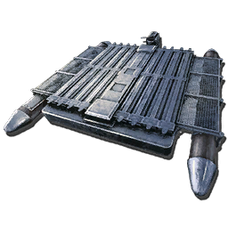 The Motorboat is a Vehicle that allows for transportation on water. The Motorboat's surface is useful for establishing a mobile base, seeing as Structures, Beds, and Containers can be placed directly on top, though Foundations must be used to build some Structures upon it such as Walls.

It is the upgraded version of the

Wooden Raft and offers a greater speed, size and health than its wooden counterpart. It uses