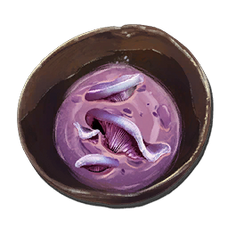 Mushroom Brew is a Dish in the Aberration DLC of ARK: Survival Evolved. It can be cooked in a Cooking Pot or Industrial Cooker.

It cannot be consumed by survivors. When fed to tames, it temporarily protects them from any radiation for 120 seconds. Tames cannot be fed another brew until the first one wears off.

Many of the new Aberration creatures are already immune to this radiation, but the following creatures are noteworthy for not being immune:

As with all cooking recipes, if cooking in a Cooking Pot, be sure to include a Waterskin, Water Jar or Canteen that is at least 25% filled.