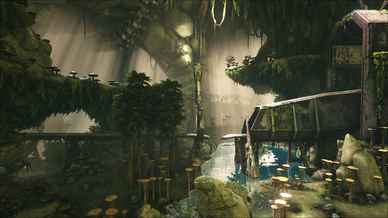 The Mushroom Forest is one of the spawn points in the Aberration DLC. Considered to be an "Easy" spawn, this area has vast amounts of resources for survivors to start out with. Large mushroom "trees" spread out commonly here and are a good source of Fungal Wood and Thatch. The Mushrooms that litter the cave floor are also useful for many tames and even offer stat benefits such as poison immunity. There is also a large amount of water in this area via waterfalls and streams. Although this is considered "Easy", its best to avoid the waters edge if you are an early survivor due to the large amount of Piranhas and other predators that lurk in the streams. Earthquakes also happen frequently here and due to the areas layout its easy to gather Gems and other items using the new Debris system.