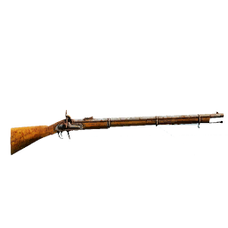 The Musket is a Weapon in the Primitive+-DLC of ARK: Survival Evolved.

The Musket is a reskinned Longneck Rifle, but the texture is far different. Can inflict a lot of damage, and is able to easily one-shot unprotected players. It can also one-shot some small dinos, but do not attempt to use Muskets against a Rex. Though Muskets are not overwhelmingly powerful, in Primitive+ they’re the most powerful weapon available to survivors. As opposed to the Crossbow, which isn't very useful from far away, the Musket can easily hit targets at a great distance. Although it may take several shots, the Musket allows you to solo kill even high level creatures such as Alpha Raptors and Carnos, as well as others, like a Therizinosaur roaming too close to your base. Just make sure you're at a safe position while shooting. Though 10-20 shots are usually all that’s need to kill a low level Alpha Raptor, a high level could need up to 50 shots, so always be sure to have enough ammo. For lone survivors, or possibly even small tribes, ammunition can get quite expensive, so try not to waste your ammo on weak targets.