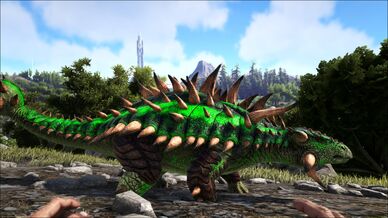 For each offspring up to three mutations can occur, each with a 2.5% chance, assuming both parents are eligible to receive a mutation. If multiple mutations occur, they may affect the same or different stats.

The probability for at least one mutation when the parent that provides the improved stat has 20 mutations or higher is 4.07% because the game prefers the "weaker" of both parents to provide the mutation increase in the ancestry by 55%.

The probability for at least one mutation in an offspring whose "worse stat" parent has 20 or more mutations is 3.31%. because the game prefers the "weaker" parent as the carrier of the mutation increase in the ancestry. Since the "weaker" parent is already above 20 mutations, the game disregards the mutation. This will end in a lower mutation probability than the previous case. This scenario will not happen in the normal game flow since the parent that carries the mutated stat will usually be the one whose stat is higher.

The probability for at least one mutation in an offspring whose parents each have more than 20 mutations is 0%.[1]

Stat mutations are determined and applied in the following steps (from the code at [1]):

Many write-ups regarding mutations will mention "mutating a stat on a parent" or similar language, which may be confusing if you are new to breeding. To be clear, only the offspring's stats are ever actually modified/mutated, after they are initially set in step #1 above. The mutation mechanic assigns one of the parents as the source of a mutation, but it is not actually mutating the parent creature.

When you read "parent has 20/20" or similar below, this is referring to the total mutations on the parent - its Matrilineal+Patrilineal mutation Counters. See the Mutation Counters section for more details and also the code at.[1]

The initial stat values are selected from either the mother or the father, with a 55% chance that the stronger stat will be selected. For example if the mother has 20 wild levels in melee and the father has 30 levels, it is 55% likely that the offspring's melee value will initially (before mutations) be set at +30 levels.

2. Selecting a Stat for Mutation[]

(This step along with the next three are repeated for three iterations.)
A single stat is selected for possible Mutation. Only stats which can be leveled up for the species will be selected.

3. Assigning a Parent as Source of Mutation[]

One of the parents is chosen as the source of the mutation, this is based on the stat picked from the parent, with a 55% chance that the weaker parent (in that stat) is chosen. This is a completely independent check from the initial stat assignment, meaning that the father might have provided the offspring's initial melee stat, but the mother is the source of a mutation to it.

If the source of the mutation has reached the 20 mutation limit, then this mutation chance is lost and a new iteration (if any are left) begins at #2. This means that the combined number of mutations for either the father or the mother must be <20, because the check is performed with the baby's mutation counter (see next section).

For example, if you breed a 20/20 father and a 0/20 mother and on mutation iteration #1 (of 3) the father is chosen as the source for a mutation, the mutation does not happen (the 2.5% chance is not even evaluated) and the iteration is complete. This of course reduces (by approximately 50%) the already-slim chances of a mutation actually occurring so if you want the full 7.31% chance of at least one mutation, both parents must be <20. See the section below on mutation Stacking for more information about breeding maximum stats.

If the "source" parent is valid, then the 2.5% chance is evaluated. If this check fails, this mutation iteration is complete and a new iteration (if any are left) begins at #2.

If the mutation check succeeds, then the offspring's stat is evaluated; if it's determined less than 255 levels it is then given 2 wild levels and the mutation counter on the side (Matrilineal/Patrilineal) of the source of the mutation (not the source of the initial stat) is increased by 1. Additionally, a random mutation to a color region will occur. This color mutation may not be obvious due to it resulting in a very similar color to one of the parents, or due to the algorithm choosing a color region not used by the species.

Any color (including dyes) can be selected for the resulting color mutation, with around a 10% chance to select a dye and 90% chance to select a normal color. Also note that the invalid color IDs 0 and 227 can rarely be rolled. ID 0 shows only the creature base texture, while ID 227 shows as white.

Regardless of whether or not a mutation occurred, the process is repeated twice more. The same stat may be affected twice (+4) or even three times (+6) if you are especially lucky!

The Ancestry screen for each creature shows a mutation counter on both the Matrilineal (mother's) and Patrilineal (father's) side. These numbers do not show the actual mutations on the creature. Rather, they are a combination of the parents' mutation counters plus any actual mutations expressed when the baby was hatched. Without knowing details of the ancestry of a particular creature, it is impossible to tell how many actual mutations have been a) carried forward from a parent or b) expressed at birth (though with some reverse-engineering it is possible to make some guesses). The reason the numbers are given as X/20 is explained below.

Wild creatures begin with zero mutations on both sides. Baby tame creatures (from breeding, not from stolen eggs e.g.

Wyvern) inherit a base mutation counter value from each parent. This base value is equal to the parent's own matrilineal + patrilineal counters.

When considering creatures as potential parents, if the creature's combined mutation counters (Matrilineal + Patrilineal) is greater than 20, then any potential mutations which have that parent as the source (Step 3 above) will automatically fail.

Here is an example showing some possible mutation counter results for Mutated and non-Mutated babies:

How to Breed Super Creatures[]

Note: The goal of this process is to obtain a level 449 creature that has NO levels in any stat except the ones you explicitly want. That's why we're starting with a level one-ish dino in step 2.

Every new color mutation that appeared in the process was kept, so in the end there were around 200+ Rex's of every color imaginable on each color region.

The Rex in the example was bred a little different, all levels in movement speed were eliminated in the end.

Either a) the stat mutation targeted Movement Speed, which will not result in a visible increase in the stat value or b) the source of the base stat was the weaker parent, who was exactly two wild levels below its mate and so, after mutation, the baby ends up with exactly the same stat levels as the stronger parent. It looks to you like the baby just inherited from the stronger parent when it actually has [weaker parent +2].
Note that a stat mutation is always detectable through a higher Torpor value and higher total level. That is, if you see that Torpor & total level are higher than expected, it is certain that a stat mutation occurred even if it is not obvious.

This can happen as a combination of the first two cases. The only thing that visibly changes is the Torpor and the total level.

No, there is a level cap of 450 on official servers. Any tamed/bred dinos that reach levels above 450 on birth are deleted by the game after server restart and once you hit the 450 Levels on your adult dino you won't be able to level your creature anymore. Note that selective mutation breeding is a very long process and it’s going to take months of real time, until that limit is hit.

No, mutations cannot be transferred to other creatures. Only offspring can get new mutations. As well, the game does not record which stats on a creature are mutated or by how much. Once the mutation algorithm is finished and the baby is hatched/born, the only data recorded is the current levels in each stat and the total Matrilineal and Patrilineal mutation counters. The game does not record whether the current stat levels are naturally inherited or mutated.

No, at least one parent with a total mutation counter of less than 20 is needed to have an offspring with a mutation. If only one parent meets this requirement, the chance for a mutation is approximately halved..

No. The mutation counter doesn't reflect the stats of the creature and is independent of them, so a creature with 0 mutations can have very high levels and a creature with a high mutation-counter can have 0 levels in each stat. For more information watch one of tagbacktv’s videos on mutations.