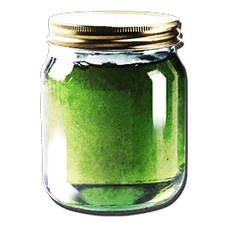 Nameless Venom is an item in the Aberration-DLC of ARK: Survival Evolved. It is gathered by killing

Nameless at a rare drop rate when harvesting from their corpse.

The only possible way of gathering venom is through killing off

Nameless. Be advised of the potential danger they possess, especially when leaving the alpha-affected nameless alive for too long may cause a