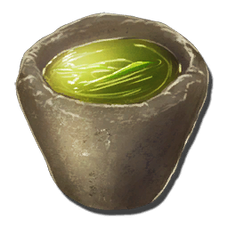 The Narcotic is an item in ARK: Survival Evolved. It can be used to keep dinosaurs unconscious during Taming.

Upon consumption, Narcotics increase the

Torpor of a survivor or creature by 40, which is a bit more than the amount of torpor given by the 5 narcoberries required to make it (5 × 7.5 = 37.5). In addition, unlike the berries themselves, the narcotic doesn't spoil.

Instead of Narcoberries the same amount of

Narcotics are primarily used in the Taming process to keep dinosaurs unconscious. This is done by putting the Narcotic in the creatures inventory, selecting it, and pressing the Use key (E,

). The creature's torpidity will then rise by a total of 40 over the next 8 seconds. 5

Narcoberries will produce a bit less of Torpor and unlike the berries, Narcotics do not spoil. This process can be used against an unconscious player for the same effect. Especially for creatures with a fast decreasing torpor (specifically greater than 6.5 per second[1]), narcoberries are the better choice because the 5 berries will increase the torpor for 5 × 3s = 15 seconds as opposed to one narcotic that increases the torpor only for 8 seconds. During the increase of the torpor it will not decrease, giving berries an advantage when taming creatures like

Dimetrodon. Narcotics and Narcoberries do not affect the Taming Effectiveness.

Narcotics can also be used to give the player increased

Health regeneration for a short time, although this will cause you to fall asleep due to the rapid increase in torpor it causes. Players with a higher

Fortitude will be more resistant to this effect, and will be able to take more Narcotics before they are knocked out.

Narcotics are used to craft the following items: