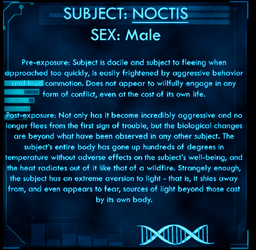 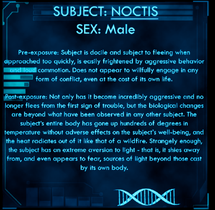 Metal
Habitat
The Noctis Arena, occasionally accessible through the Boss Teleporter in all Dungeons.

The Noctis is one of the bosses in ARK: Survival Evolved Mobile.

The Noctis is essentially a giant, fiery unicorn. However, instead of fleeing if approached, it will instead attack the person approaching it. While this doesn’t do too much damage, one should still stay wary of its kick, as it could inflict torpor and knock one out, leaving an unsuspecting survivor helpless to the Noctis's attacks.

The Noctis always spawns with the same color scheme and has no color regions.

This means it is currently impossible to make alterations to the Noctis's colors.

This section describes how to fight against the Noctis.

If the survivor encounters the Noctis, it must be tamed in order to beat the Dungeons.

To tame the Noctis, the survivor should attempt to jump on it as quick as possible, and feed it 20x20px Rockarrots. A Major Soothing Balm is highly recommended. The survivor should be wary of the lava in the Arena. It does substantial damage, but does not hit the player.

There is a large rock on the left side of the arena which provides safety from the Noctis. However, the Noctis cannot be mounted from this rock, so the player must jump down to tame it.

The kick of the Noctis applies lots of

Torpor, and getting knocked out can prove fatal.

If the survivor comes unprepared, they may face an issue with time. Act quickly once you have enough carrots to tame the boss.

Video on how to encounter and tame the Noctis.