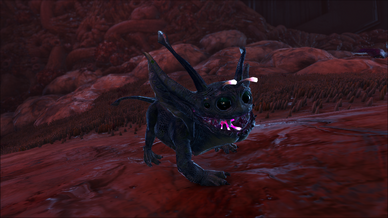 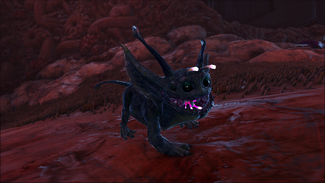 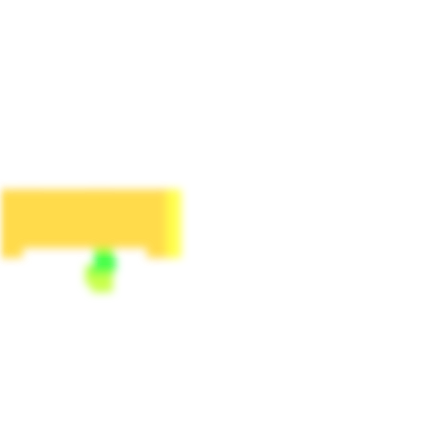 The Noglin is a creature in Genesis: Part 2.

The Noglin is capable of controlling the minds of Survivors and Creatures, such as a

Rex. Under the right circumstances, the Noglin can attach to said Creatures or Survivors, giving control over their minds to its owner.

The Noglin is a small, bioluminescent alien Creature with large pointed ears that scaly and shaped very similarly to a cobra's hood. It's head is rather large with four large eyes similar to those of a Jumping Spider. On top of its head there are two pairs of antennae: two that are short glowing bulbs, and two that are long tentacle like tendrils. It has a split jaw, which separates to reveal its glowing tongue and many jagged teeth. Its body is cherubic and plump being covered in a mix of skin and scutes. It has clawed fingers on each of it's stubby limbs and a thin devilish tail.

This section displays the Noglin's natural colors and regions. For demonstration, the regions below are colored red over an albino Noglin. The colored squares shown underneath each region's description are the colors that the Noglin will randomly spawn with to provide an overall range of its natural color scheme. Hover your cursor over a color to display its name and ID.

This section describes how to fight against the Noglin.

If you are looking for a Noglin, do not bring large creatures capable of high damage, such as a Giganotosaurus, Rex, or Spino, especially if you bring more than one tame. If the Noglin controls it, it can devastate your other tames.

Tek Helmet can help with locating Noglins before they latch on.

Bring a harpoon launcher with net projectiles, a weapon capable of killing it (a shotgun is highly recommended,) and a longneck rifle with tranquilizing darts. If you spot a Noglin, you can either net it and kill it, or knock it out to prepare any taming setups that you have brought. They're fragile and also don't have much torpor, though you have to be quick on your choice.

Noglins are small and may not be noticed before they're capable of taking control of one of your creatures. Possessed creatures caught by Noglin lose health over time and can die if left on their head for too long. They seem to do a percentage of health as damage to tames while controlling it, so even high-health tames are at risk of death. Moreover, the creature will not be responsive to you while its possessing the mind.

If the Noglin mind controls you, it will make you punch yourself.

Noglins have a long cooldown before they can repossess the same creature again, so if you've brought a solo creature and it gets controlled, you can kill it quickly afterwards. They also have low health so killing them is easy if you get the first move against it.

Similar to the Troodon, you must offer your tames to the Noglin. Unlike the Troodon, the Noglin will instead mind-control your creatures, adding to its taming progress per full mind-control session. This is however, very inconsistent and can sometimes take a fairly long time before it will ever begin to mind control a tame. There is currently no known way to speed up the chances of a mind control session occurring, though if they refuse to attack your dinos, knocking them out can "reset" them and make them more likely to do so.

It is recommended to bring packs of relatively low-damage, durable creatures, to ensure that you will not die from your own tames, nor will the mind-controlled tame kill the others. Unless you're looking for 100% taming effectiveness (see below,) the Carbonemys is the best creature to have mind-controlled for all the above reasons. It's even quite slow so it won't run off.

Important Note: Wild Noglins prefer not to mind-control the same dino more than once per taming attempt. It is recommended to have several high-level Brontos, swapping them out one by one with Cryopods when the wild Noglin mind-controls one and releases it. Cactus Broth is also suggested, as getting too close to the Noglin after it releases one of your dinos may spook it, causing it to run away. You can use both bred and unbred dinos to tame the Noglin, but unbred dinos give far more taming affinity. Cloned tames work just as well as the original.

If you wish to contain the Noglin, search for a flat area as that will be necessary for constructing an area to tame it. You can knock out the Noglin with a tranquilizer dart from a Longneck Rifle, then create a small box with some fence foundations and 1-high walls around it. While it's knocked out, position up to 8 Carbonemys on passive around the box with their heads facing inwards towards the box, then surround them with a circle of stone dinosaur gateways and reinforced dinosaur gates. The gateways should be able to snap to one another to create the circle. The Carbonemys themselves should be leveled into health and not into melee since you want them to be as survivable as possible.

Once everything is set up, remove the box around the Noglin to set it free. Do not mount one of the dinos you want it to control. If this happens, it may try to go towards you as the player, get onto the creature, then bug out to where it won't attack any other creatures. If this happens, knock out the Noglin with another dart to reset it. Once it wakes up, you should be out of the box and watching from above. Let it mind control the Carbonemys one by one. While it's controlling one, you can cryo a Carbonemys it has already controlled since it takes an extremely long time before it will want to control it again. Bringing spare Carbonemys would be wise to deploy if needed.

Every creature supplies a certain amount of taming effectiveness to the Noglin, though there doesn't seem to be a particular formula for determining what is best. If you are looking for 100% taming effectiveness, you need to use a maximum of 5 tames. If the Noglin mind controls more than 5 tames in the process, it will lose effectiveness. As of now, there are only 2 known creatures to work with this, and they are the Brontosaurus and Voidwyrm. The Voidwyrm has some advantages over using max level immunity

This strategy doesn't require any trapping, though be mindful that the Noglin will run rampant with your Voidwyrm and you will need to have the others ready for it to control.

Noglin has the ability to temporarily mind control non-allied survivors and creatures within range for a limited time. However, these can't be used for taming other creatures as it kills the creature if either it runs out of time, or if the creature is knocked out from high Torpidity.

When controlling survivors the Noglin can interact with some of that survivors structures such as Doors or Generators. However the mind controlled survivors can not ride their own dinos.

Creatures that have bleed damage or increased stats only while wild, such as Giganotosaurus, have their stats brought in line with its tamed variant and lose their wild bleed ability, Additionally. Some buffs such as the Spino water buff also seem to disappear

The target needs to have at least 50% of their

Health, and be a lower level than the Noglin, reducing it's effectiveness in the middle of a fight or against high-level hyper-mutated dinos.

Additionally, as Noglins cannot be bred, once mutated tames reach levels higher than a max level wild tamed Noglin with 100% taming affinity, mutagen, and all levels applied can reach (>332 on official) they will be entirely immune to all Noglins from that point forward.

Keep in mind when planning to use a Noglin that they always suffer from cryosickness when thrown out of a cryopod so make sure you get it out 5 minutes before planning to use it. They do wake up quickly due to low torpor and high drain, an may be carried on your shoulder once awake, but they will be unable to move on their own until the 5 minute timer is finished, even when activating brain hunt mode. If you successfully throw them onto a creature even while they are suffering from cryosickness, you may control that creature as normal, but the moment the Noglin disconnects, if it is still in it's 5 minute sickness period, it will return to being immobile.