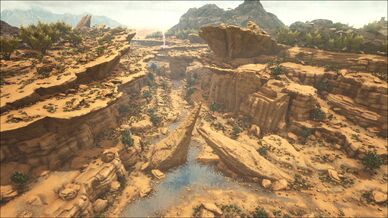 The Northern Canyons is a region in Scorched Earth.

Aside from the Oasis, the Canyons is the only source of non-depletable water. That, combined with the natural defenses of the canyon walls and the cooler ambient temperature making it a prime location for settlement. However, it is still home to various predators and the occasional Rock Elemental, so one will have to take care in clearing out the area if one wants to build here.