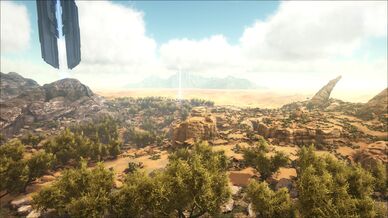 The Northern High Desert is a region in Scorched Earth.

The Northern High Desert is a vast and relatively fertile area in the center of the map, with few natural predators, making it a popular starting area for low-level players. Water veins are relatively easy to find, though players might still compete for water sources, especially if they haven't been tapped with water wells yet. The abundance of trees in the area also makes it easy for players who only have access to Thatch structures to begin building simple homes. While still hot, the temperature isn't as harsh here as other areas. Even people with high fortitude will still have some trouble during Superheat.

Lots of vegetation around most of the Northern High Desert.

Some of the Northern High Desert is near the Dunes which are good for high and low level players for not only the wind, but the enemies that spawn there.