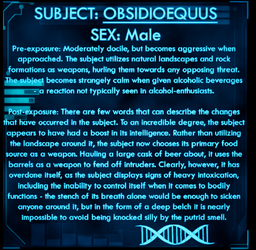 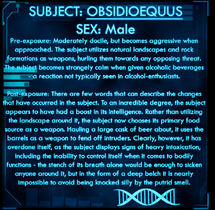 Stone
Habitat
The Obsidioequus Arena, accessible through the Boss Teleporter in certain Dungeons.

The Obsidioequus is one of the bosses in ARK: Survival Evolved Mobile.

The Obsidioequus always spawns with the same color scheme and has no color regions.

This means it is currently impossible to make alterations to the Obsidioequus's colors.

This section describes how to fight against the Obsidioequus.

The Obsidioequus does not summon minions making it easier to fight, without having to switch between melee and ranged weapons. With proper armor the boss does not deal too much damage making it ok to stay put for a while with medical brews. The Obsidioequus (Like the Chalicotherium) has a dirt or poop attack that deals torpor, so stimulants are required.

Use long range weaponry and always have stimulant on hand (compound bow or shotgun is recommended). If you have a good sword you can get under its belly and defeat it by slicing its belly.

The obsidoeqqus can throw barrels and it can repeatedly throw dirt and do a lot of torpor. The barrel attack can also launch you very high up so be careful. The room is also full of beer that makes you drunk so you cant see properly

The Obsidoequus is regarded as one of the easiest bosses.

The Obsidoequus was the first boss to ever be fought by 10 players at once.