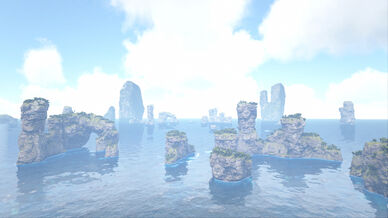 The Ocean is a region in the Genesis: Part 1 DLC.

A very large water biome that gives survivors increased swim speed and oxygen efficiency. Contrary to the biome teleport function the ocean biome is extremely easy to survive in. The best way to survive is, arguably, at first building a raft as well as a simple bed. If hide is a issue simply fix a glitch and you’ll be able to purchase the necessary hide. After completion you can continue to fix more and more glitches, and prepare to build a small hut or base on the back of your raft.

Luckily because of the way underwater sanctuaries or “bubbles” are constructed and placed you can begin farming metal to construct metal tools within a few hours from rich metal nodes at the ocean floor. After the completion of metal tools such as Pick, Hatchet, and a bow it’s recommend you kill some giant turtles and prepare yourself a wooden ocean platform, and then fill in the flooring with a roof, preferably stone but wood works good if your being resource efficient. And from there build a base like any other with the added bonus of the floor having roof to snap to.

Unfortunately as most of the islands are quite tall so a Bloodstalker or a Astrocetus would be necessary to reach the top to construct land bases if one so chooses.

Whirlpools appear frequently in this biome, and are best avoided. Unfortunately they can appear where the player is with no warning. Once stuck in a whirlpool, it is difficult to break out without the use of a tame, and the player will be held in place while wild creatures are free to nibble on them, so beware of them.

Eels spawn in large numbers in this biome, all the way up to the surface, but there are few Cnidaria.

Wild X-Mosasaur's can become trapped in the rising air bubbles and lifted all the way to the surface, where the bubble will pop and the mosa will swiftly descend, which can be helpful while taming as it is mostly stationary asides from slowly floating up.

As oxygen consumption is lowered in this biome, you can greatly reduce damage to scuba gear by only putting it on just before or while drowning, restoring oxygen, and then taking it back off again.

More the area around the centre of this map is unbuildable due to the missions.

When teleporting in or respawning it seems the player is always spawned on land, at the top of one of the islands.

The islands are mostly very tall with sheer cliffs and are impossible to climb back up without a climbing pick or rock drake.

The islands are covered with an abundance of trees and plants, making basic early survival possible.