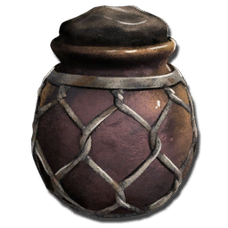 The Oil Jar is an item in the Scorched Earth-DLC of ARK: Survival Evolved.

The Oil Jar is a clay jar that is full of a highly flammable, petroleum mixture that can be thrown down and connected to make a trail of flammable materials that can be lit on fire to burn anything in its path including creatures and players that come in contact with it. This makes it good for attacking smaller bases during raids. For example, one could use it for defense of a base by making a trail all the way around it and lighting the oil on fire as the enemies draw near or it could be used aggressively by spamming them on the ground before lighting them up.

One of the best ways to use the Oil Jar however, is in a tight space where creatures, players, and certain creatures can constantly be burned till death.

A burning oil blob will also destroy any structures in Thatch Tier and Wood Tier, as well as a handful of other structures.