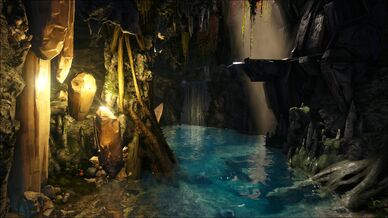 The cave entrance is located at lat 48.3 lon 27.2, on the West side of a small lake, where there is enough room in the entrance to park several Rock Drakes. Further into the cave is a narrow tunnel through which you must crouch - this prevents you from taking most tamed creatures into the main cave.

The Artifact is located at lat 51.2 lon 23.8. After reaching the initial waterfall take the path to the right to reach the artifact.

There is a drop between cliff edges that you will need to traverse to get to the artifact, which can be overcome with

to get back out).

It is suggested that you bring decent armor, guns and plenty of ammo.

There are several ways of traversing the caves much easier: