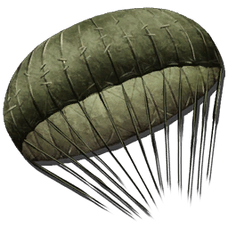 The Parachute slows you down when you're falling, potentially preventing lethal damage. It can be used to safely get down a cliff, jump into an enemy base without landing, or simply save yourself if you accidentally dismount a flying creature.

While falling, use the parachute from your inventory and hold your backwards movement key (default S) to slow your fall. It does not automatically activate, so it's a good idea to have it in your hotbar if you think you'll need it.
To deactivate the parachute and resume falling normal, press your Jump key.
You can move in different directions while in flight by pressing your set movement keys.(you need to hold the key for a while to get some movement in the direction you want)

The parachute can be used as a form of air travel, given a high enough starting point and a player with a high enough movement speed. Horizontal momentum seems to be almost perfectly conserved from the point of the parachute opening, and there is relatively little vertical drop. Sprinting and then immediately opening a chute can allow one to bypass difficult terrain without a trained flyer. This works best from the various mountains across the map, and with enough movement speed it is possible to reach the southern coast jumping from the northern mountains. It is advisable to bring at least one reserve parachute for your trip, as it is quite easy to overshoot your target or stay airborne for longer than intended. Dropping from the chute by hitting the space bar and subsequently opening another chute when closer to the ground is the easiest way to lose altitude quickly.

Alternatively the Player may aggro another creature and use the Knockback from their attack for momentum.