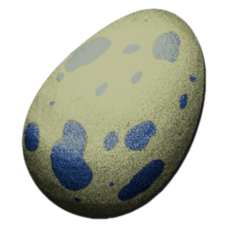 The Parasaur Egg is one of the Eggs in ARK: Survival Evolved.

Parasaur Eggs are randomly dropped by

Parasaurs. They can be eaten or used to make

Parasaurs mate, the resulting egg can be hatched into a baby

Parasaurs will cause them to become hostile and attack the survivor.

Parasaur needs between 18h and 2d before having the capacity to lay eggs again. The incubation time can be reduced by up to 20% if the egg is placed in an

Collecting a Parasaur Egg is relatively simple with some preparation. A single Parasaur can be dealt with relatively easily if a player has a decent weapon, such as a spear or pike, some form of clothing, and a blood bag or two (to help recover faster.) While killing one Parasaur is fairly easy, a group of Parasaurs could prove more of a problem. Parasaurs are not very good fighters, but they can easily gang up on an unfortunate thief. They can also outrun the player and many other land-based mounts. If fleeing is preferable, a flying mount should be considered, since they can cross terrain far more efficiently and safely than a Parasaur. Aquatic mounts also prove to be a viable escape, and since Parasaurs can be found near the shore or a river in many areas, such a situation can occur.

Herbivore Pheromone applied has laid one. They will hatch quicker than normal Parasaur Eggs and the baby

Parasaur will have better stats when it has hatched.

Super Kibble (Parasaur Egg), which will