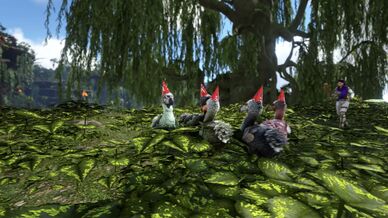 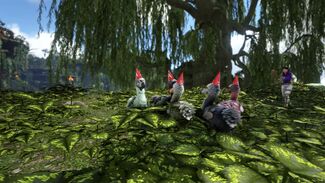 The Party Dodo is one of the Event Creatures in ARK: Survival Evolved.

They wander around the beach doing near nothing.

Its a regular Dodo but with a little birthday party hat.

This section displays the Party Dodo's natural colors and regions. For demonstration, the regions below are colored red over an albino Party Dodo. The colored squares shown underneath each region's description are the colors that the Party Dodo will randomly spawn with to provide an overall range of its natural color scheme. Hover your cursor over a color to display its name and ID.

This section describes how to fight against the Party Dodo.

You can do the exact same thing that you would do to a regular dodo because its practically the same apart from dropped loot.

Just do something it will probably work out

Anything that deals damage are able to be used against this creature and probably kill it making you able to collect the sweet, sweet, revenge cake.

The only dangers when encountering this creature is that it may fight back.

Anything that does damage will do to kill this thing.