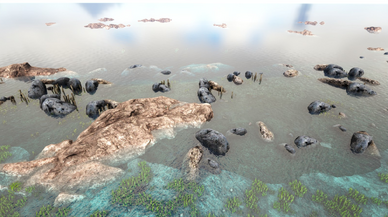 Pepper's Reef is a region in the Ragnarok DLC.

The Pepper's Reef is a massive reef off the coast of the Deathsands. The area includes shallow, coastal water with various water plants and coral growing around. The most notable feature is the numerous amount of large rocks that poke out of the water and the many drowned tree trunks. It appears as though the area used to be a large archipelago or even part of the deathsands, but has been weathered away to a reef. There are few resources here, save for some sunken wood and pickable stones. It is an entire, extensive biome not even shown on any map and all but ignored and forgotten about by most.

As it is a secluded area with many different rocks to build on, it could make a beneficial base location due to how far away it is from other areas of the map. It is however a rather difficult place to live long term; not for traditional reasons such as raiding or predatory wildlife, but because of its choking isolation and sheer lack of meaningful resources. Dead logs can provide thatch and wood, but just about everything else, including several extremely basic essentials such as flint, metal, fiber and berries are totally absent. All potential life in the area resides in the sea. The only nearby shore to find supplies on is the vast Deathsands, which isn’t much better off for basic resources and incredibly dangerous. Anywhere else is a rather long journey to make on a regular basis, and would ultimately end up using most of your time. In essence, it might not be a good idea unless you are up for a true hermit-of-the-sea style PVE challenge.

That’s not to say the area is useless however; it can easily become a secret weapon for those clever enough to figure out a use.