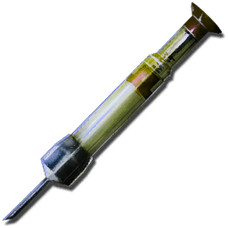 When hitting a player or creature with this dart, any nearby wild creatures will start attacking it. Even otherwise passive or skittish creatures will attack the target.

When fighting a large creature, you can shoot it with a Pheromone Dart and the wildlife around you will help you defeat your target. It can also be used to distract hostile creatures, allowing you enough time to escape.

PvP use: when you see an enemy tribe taming a

Giganotosaurus, feel free to give the creature a shot of that Pheromone dart and watch the chaos ensue. In areas of dangerous creatures, the dart can be particularly effective to harass or even kill an enemy with aggressive wild dinos. The possibilities for such kinds of mischief are endless!

It is also useful for getting

Troodons to attack high XP tames, such as baby