This article is about the Pike weapon. For the region with the same name, see Pike (Genesis: Part 1).
Pike 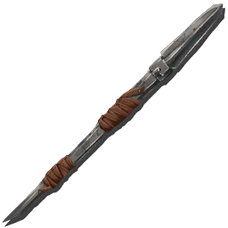 The Pike is a melee weapon in ARK: Survival Evolved. It is an advanced, metal version of the Spear.

It differs from its Wooden Counterpart by having a durability bar instead of breaking randomly, but unlike the Spear, it is not throwable. This makes it less versatile, but longer lasting and with higher melee damage.

The attack speed is about 1.5 attacks per second which results in 60 damage per second against unarmored targets, using a 100% damage pike and having 100% melee damage.

The Pike can only be crafted at a Smithy, looted from a dead dino's inventory, or found in Loot Beacons.

The Pike also has greater range and knock back, versus the Sword. This allows for attacking many creatures at a safer range. However, it is a double-handed weapon that disables shields. But, you can use it while running, unlike the sword, which you have to jump, stand still, or walk in order to use it.