This article is about Plant Species X, not to be confused with 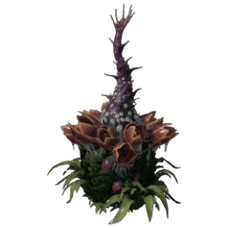 Plant Species X Seeds can be found from killing the natural plant, or from harvesting the mountain bushes that look like red sticks coming out of the ground or the cattails that grow along the shore in the swamps. Also, a creature such as an

Ankylosaurus can harvest these bushes and collect the seeds.

Once fully grown, it is controlled the same way as the

Auto Turret, with settings for range and targeting, it also shoots down explosive projectiles. It rapidly fires glowing green spores that have similar damage characteristics as

Dilophosaur spit, both slowing and blinding the target. When damaged, the plant will regain 3HP every second. While shooting it consumes 150 fertilizer units per shot. It will not shoot if there is no water in the crop plot.

A dinosaur that is aggravated by a player or other dinosaur and is attacked by Plant Species X will stay aggravated at the player/dinosaur until they lose interest and will begin moving towards the plant, mostly with little success due to the plant's knock back and rapid fire, even taking out the largest of dinosaurs. However, it is effectively worthless against the Titanosaur.

Plant Species X can be customized to attack players, tamed creatures, and/or wild creatures. They can also be set to a custom range and will shoot above and below — assuming they have a line of sight of the target — making them a good defense against flyers.

The time to grow the Plant Species X appears to be controlled by the games time mechanics rather than real life. It will take approximately 15 in game days to fully grow a plant in the Large Crop Plant.

The Plant Species X has multiple range settings, which correspond to the following distances:

There are seven targeting settings. (All of these settings ignore players and tamed creatures belonging to your tribe.)

The Plant Species X grows the same as any other plot-based plant, consuming both water and fertilizer to grow, but unlike other plants, it consumes significantly less of both once it reaches maturity. One should monitor water levels when growing these plants indoors.

Seeds for Plant Species X can be collected from two locations:

As of 242.0, the Plant Species X can no longer be built on Quetzal, Brontosaurus, Mosasaurus, Plesiosaur, or Paracer platform saddles. Any existing Plants on such platforms will no longer fire. This is a server option of "OverrideStructurePlatformPrevention=true". Otherwise they're now only allowed on Rafts and non-moving Bases.

There is also a limit of 100 turrets that can be placed within a 10000 UE-unit (~33.3 foundations) radius. This applies to the combined total of all Auto Turrets,

On ARK: Survival Evolved Mobile, the

Plant Species X have a limit of 10 combined within a 16 foundation radius.