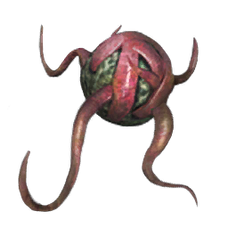 The Plant Species Y Trap is an item in the Scorched Earth-DLC of ARK: Survival Evolved.

The trap works similar to a Bear Trap, tangling players and small to medium-sized creatures that step on them. When a creature gets trapped, durability depletes at a rate of ~3 units per second. A total durability of 100 means it immobilizes the targets for a shorter period of time than the Bear Trap does. However, it is almost completely invisible when placed on the ground, which means it can't be spotted as easy as the Bear Trap. however unlike the Bear Trap the Plant Species Y deals small amounts of damage over time to any creature trapped lowering Taming Effectiveness on any Knockouts.