This article is about Poison Grenade, not to be confused with 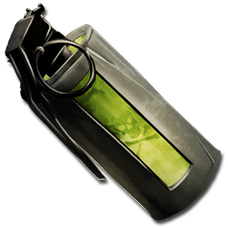 The Poison Grenade is one of the explosives in ARK: Survival Evolved. It explodes 2.5 seconds after being thrown. It doesn't deal any damage, but quickly raises the

Torpor of humans in its radius. The grenade has no impact on Creatures, it only works on Humans.

It is very useful for raiding enemy bases, as it knocks out players very rapidly so it can be thrown through a window or into a room to knock out the enemies. Keeping them unconscious also keeps them from re-spawning and having another chance to kill you. Enemy auto turrets will shoot down poison grenades.