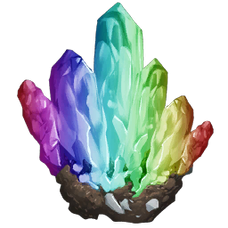 The Primal Crystal is a Resource in the Expansion Map Crystal Isles.

They can be gathered by knocking out wild