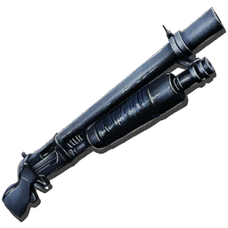 The Pump-Action Shotgun is a ranged weapon in ARK: Survival Evolved. It is a fabricated version of the

While it is heavier and its damage per pellet is lower, the pump shotgun delivers more pellets per shot. This results in around the same Damage Per Round as the

Shotgun if all pellets can be kept on target. The

Shotgun can be valuable for its ability to deal 1,280 damage in 0.7 seconds, compared to the Pump-Action Shotgun's 644 in the same amount of time. Due to the

If compared to other fabricated firearms, the Pump-Action Shotgun quickly shows clear advantages on short to medium ranges, from its massive damage output combined with decent firerate and large ammo count for a shotgun to its high damage / bullet cost efficiency and durability. It also costs just as much to craft as a similar

Assault Rifle, and less than half of the

Fabricated Sniper Rifle. Everything taken into consideration, the Pump-Action is notoriously flexible and thus the weapon of choice to most players with access to it. However, the weapon is still a shotgun, and while still dangerous at range, will only dish a fraction of its total firepower with horrible accuracy to small targets, getting rapidly overpowered by other weapons.

It can be crafted at level 55 using