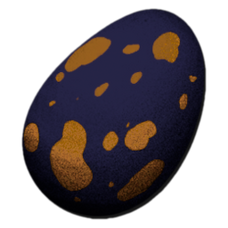 The Quetzal Egg is one of the Eggs in ARK: Survival Evolved.

Quetzal Eggs are randomly dropped by

Quetzals. They can be eaten or used to make

Quetzals mate, the resulting egg can be hatched into a baby

Quetzals will cause them to become hostile and attack the survivor.

Quetzal needs between 18h and 2d before having the capacity to lay eggs again. The incubation time can be reduced by up to 20% if the egg is placed in an

The egg can also be used to tame an

Retrieving a Quetzal Egg in the wild can be a surprisingly dangerous endeavor. Despite their usual skittish nature, a Quetzal provoked to anger is a dangerous adversary considering their health, speed, stamina, and attack. A

Pteranodon trained for high speed can outrun a Quetzal, though will quickly be slain if used in an attempt for a counterattack. A nearby aquatic escape will allow a player to flee as a Quetzal will not enter water, though in many places this might not be possible. Bringing a tamed Quetzal or two as some backup can make the process somewhat safer, but if you have a tamed Quetzal or two, it's much safer to simply collect their eggs anyway, not to mention easier to find them.

Carnivore Pheromone applied has laid one. They will hatch quicker than normal Quetzal Eggs and the baby

Quetzal will have better stats when it has hatched.

Super Kibble (Quetzal Egg), which will