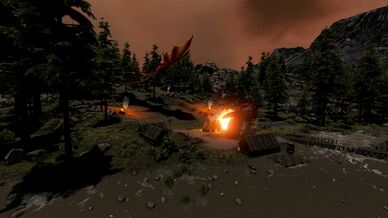 The Ragnarok Arena is a location in the Ragnarok DLC. The Arena is 20 °C or 68 °F but some parts are considered underwater due to a glitch even though they are not. so bring a little Hypothermal Insulation before coming to this fight.

Upon teleportation to the Ragnarok Arena, both the

Manticore will appear and fight the players at the same time. A timer will immediately begin counting down from 40 minutes,[1] so both bosses must be defeated within that time. Once the timer expires all players, dinos and items in the arena are destroyed.

The arena itself is significantly larger than those found on The Island.

Sometimes the Manticore doesn't drop Element, so the amount will be less.

So if you want to get all the element for a dragon kill, you must gather the element from the inventory of the dragon (if it isnt gathered by your dinos) and also ensure that a dino lands the killing blow on the Manticore.

This section describes the best way to fight against the Dragon and Manticore.

Where possible, wear a

Be mindful of the Rock Elementals that appear if the Manticore reaches a certain health state. It could pose a huge issue especially if the Dragon is still alive at that point of time.

At the start of the fight, the Manticore will land and run towards the player and their Creatures and proceed to attack. (Or in rare cases, the Dragon will land and attack first.)

Possibly the best strategy is to attack the Dragon first because its Fire Breath attack can deal huge amounts of damage to your dinos and kill them within a few minutes.

Eventually, Rock Elemental will spawn in large numbers, so bringing 3-5 Rocket Launcher loaded with Rocket Propelled Grenade are a great way of taking them out.

You will be fighting two bosses at the same time, and more wild and aggressive creatures will spawn than usual. Make sure you don't get kicked off your mount, but if you do, find a new, vacant one as soon as possible to avoid death.

Another danger is that of the Rock Elemental, because of it's 50% damage reduction from animals, and doesn't take damage from most primitive weapons.

Most of dangers are similar to that of both Dragon and Manticore.