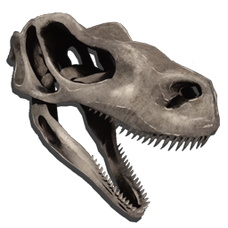 The Raptor Bone Costume is dropped by skeletal

Alpha Raptors during the Fear Evolved event or crafted in a

Cooking Pot during the ARK: ARKaeology event. It can be applied to a tamed Raptor to make it look like a skeleton.

During Fear Evolved, Alpha Raptors will spawn with a skeletal appearance. Killing and looting one of these creatures will yield a Raptor Bone Costume
The Alpha Skeletal Raptor's inventory must be looted by hand in order to get the costume. If you or your mount harvest the corpse, the costume will be lost.

The Raptor Bone Costume can also be used to summon

This skin can be unlocked by completing the Experienced Explorer Achievement, after which it will be available in your inventory whenever you respawn.