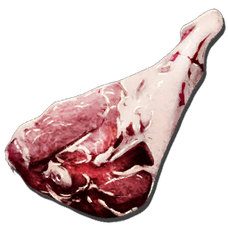 Raw Prime Meat is a food item in ARK: Survival Evolved. It can be obtained by harvesting the corpses of larger creatures.

Raw Prime Meat spoils very fast. After harvesting, a useful tactic is to store the meat immediately in a tamed creature's inventory for transport, as it spoils in 4 minutes and 40 seconds in a Player's inventory, but lasts around 18 Minutes and 40 seconds in a creature's inventory. However, if the Player wants to save Raw Prime Meat this way for later use, it should not be given to a tamed carnivore, as they may eat it if they don't have any normal Raw Meat to eat.

Raw Prime Meat is also the only taming food for the

Cooked Prime Meat it is one of the best foods for

Raw Prime Meat is very useful for taming. It is the fourth best thing to feed any Carnivore you want to tame (with

Kibble being the first,

Raw Mutton being the second, and

Raw Meat to a dino being tamed, but it tames the Dino at 3 times the speed. It also decreases the taming effectiveness by around .5% each bite, which is more effective than regular Raw Meat.

If eaten by the survivor, it slightly replenishes food, but decreases health by 5.0 points.

It can also be cooked at a

Industrial Grill, which boosts the amount of time before expiration by 45 minutes in the player's inventory, and 3 hours in a creature's inventory.

Cooked Prime Meat can also be fed to carnivores to tame at about 1.5 times the speed when compared to taming with

Raw Prime Meat is also used to cook the

Cooked Prime Meat is used to cook a

Raw Prime Meat can be harvested from the following creatures so far:

Raw Prime Meat can also be obtained by harvesting Alpha Creatures as they give prime meat instead of Raw Meat. The boss creatures

Dragon also drop prime meat. One notable thing is that

Wyvern have fertilized eggs in the wild,so butchering a young wyvern could yield prime meat, although most players just raise the baby.