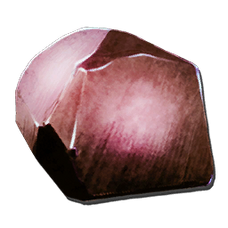 Red Gems are a resource in the Aberration DLC. They are used for crafting various items.

Red Gems can be mined from the various red or purple crystalline formations found in The Spine. They can also rarely be found from Roll Rat diggings and Earthquake Debris, however a Roll Rat will become aggressive if you pick their debris.

Red Gems are used to craft the following items: