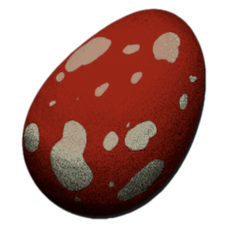 The Rex Egg is one of the Eggs in ARK: Survival Evolved.

Rex Eggs are randomly dropped by

Rex. They can be eaten or used to make

Rex mate, the resulting egg can be hatched into a baby

Rex will cause them to become hostile and attack the survivor.

Rex needs between 18h and 2d before having the capacity to lay eggs again. The incubation time can be reduced by up to 20% if the egg is placed in an

A flying mount, such as quetzal, or argentavis, and a quick ascent after retrieving a Rex Egg is a good idea, as even one Rex can prove to be a challenge on foot, let alone any others also offended by stealing the egg as well. If the egg is near a sufficient body of water, an aquatic mount can also provide an effective means of escape, as Rexes are poor swimmers. A well-planned assault or distraction with other players and/or mounts can also make egg retrieval easier, though the risk of losing tamed animals to a Rex is a questionable sacrifice for an egg. A Pteranodon is also an ideal mount to escape with, just make sure it can carry it.

Alternatively, you can tame some female Rexes to easily obtain eggs with no risk, as they will not retaliate if you pick up the eggs A Male Rex can speed up the egg laying process with Mate Boost, and an Oviraptor will also help

Carnivore Pheromone applied has laid one. They will hatch quicker than normal Rex Eggs and the baby

Rex will have better stats when it has hatched.

Super Kibble (Rex Egg), which will