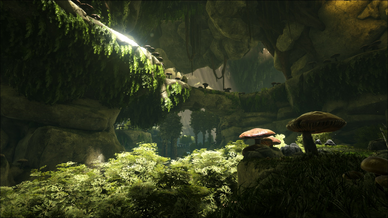 As the name suggests, the River valley is a wide canyon with a small, shallow river running through a depressed riverbed. The most dangerous creatures here are packs of Sarcos and Karkinos, and the occasional Spino. The river connects the Fertile lake and the Fallen Nexus on the northwest end to a waterfall leading down into the Luminous Marshlands in the southeast. Just west of the waterfall, the biome contains a forest bordering the Luminous Marsh, and has several access points into that cavern. The forest also leads into the Mushroom forest to the west. There are at least four charge nodes in this biome.

Can be gathered from nearby creatures